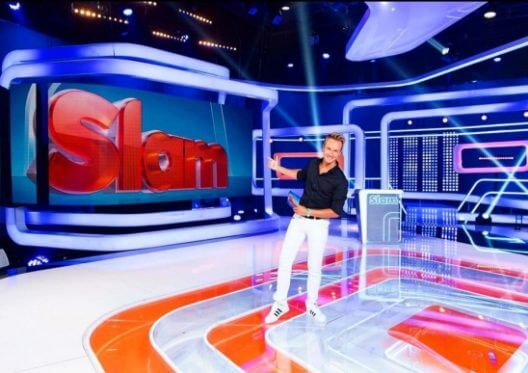 RECORD AUDIENCES – On August 1st, SLAM peaked at 17.4% audience share for the 4 years old and up! A result higher than the annual average of the game already excellent and growing (14.5% since early 2017, vs 14% in 2016). A confirmed success on weekends: Grand SLAM accomplished this summer two consecutive records, bringing together more than 12.5% of the TV viewers.

NEW SET – Now, Cyril Féraud gives us an appointment in a new decor more modern, more elegant, with always more personality. A new set, yes, but not only : it’s all the entire visual world of the game that has been redesigned, with a brand new logo and generic.

NEW INTERNATIONAL SALE – After Turkey, Switzerland and Slovenia, Grece will be the next country to adapt SLAM.
ALPHA TV has ordered a first season of 180 episodes.
The production is started and the game show will air daily in access prime-time, Monday through Friday, next October.